Yes. I said it and I’ll say it again.

Having Asperger’s doesn’t mean you get to be an ass.

I realize that Asperger’s is a neurological disorder that affects the way we interact with others. We miss social cues. Sometimes we aren’t able to externally convey the emotions we feel inside. I get it. I do. I live it every day. I know how it feels to feel misunderstood. I know how it feels to constantly doubt yourself.  I know how it feels to be bullied, belittled, and left out. If you have Asperger’s, you probably know those feelings too.  We may not pick up on social cues, but our experiences have certainly taught us how to spot when someone is being sarcastic or cruel.

You know how it feels when someone ignores you.

When someone dismisses you.

When someone is deliberately rude to you. With experience, you can even learn to tell when others are being hurtful under the guise of being nice.

You know how much that hurts. That’s why you don’t get to do it to others. Because it hurts. Having Asperger’s is no excuse for being rude.  I realize that social cues are hard for us, but common sense is not.  Logic is not. If you’re not sure if you’re being rude, you can:

*  Ask yourself “Would this hurt if someone said/did this to me?”  If the answer is “Yes”, then it’s rude.   Your friend is excited talking about his favorite reality TV show. You think reality shows are a waste of time.  Telling your friend that you think his show is not worth talking about is rude. Would you want your friend to tell you that something you are passionate about was worthless? This is especially true if the person is talking about their family, children, or pets. Although we could care less about the 50 baby pics of the SAME BABY that all look just alike, to the person sharing them, they are precious.  Because it is important to them, we should show them the same politeness we would want if we were sharing something we are passionate about.

* Ask yourself “Is this constructive? or is it just critical?” Your friend is trying to change her hair style. She has put her hair into pigtails like a toddler would wear. She asks what you think.  A rude, critical response would be “It looks childish. You’re not two. That hairstyle is for toddlers.”  A constructive response would be “I don’t think the pigtails really bring out your best. I like it when you wear your hair parted on the side because…”  A constructive response can encourage your friend to change something without hurting her feelings.  The end result is the same – change. The difference is that one response is hurtful and the other is encouraging. Would you want to be hurt or encouraged?

* Remember, just because something is true doesn’t mean it is something that needs to be said out loud.  I think this is one of the hardest lessons for Aspies. If something is TRUE, why can’t we say it?  I mean, it is the truth, right?   In an online group, a woman said she told a coworker that he “smelled like a hobo on a subway”.  Was he smelly? Probably.  Would this comment have hurt her if someone told her she stunk? Yes.  Was it constructive? No. Critical? Yes.  Then it shouldn’t have been said. Her “truthful comment” hurt her coworker. It was mean and unnecessary. Just because a statement is true doesn’t mean it isn’t hurtful.

I realize that most Aspies I have met/talked with online would rather have someone tell them the truth straight out. For us, a lie (even a little one) to sugarcoat the truth is offensive. If I look ridiculous, tell me.  For the love of Pete, please don’t let me leave my house smelling like a week’s worth of body odor! This is another way the NT/alltistic community is different than us. Although we would want a friend to be direct and say “Whew. You smell pretty bad. Maybe you should hit the showers before we go”,  most NTs find this offensive. They may want to know about the BO, but they want you to tell them sweetly, softly, gently. For the straightforward Aspie, sometimes this can feel like a lot of unnecessary dialogue, but it is considered rude to be direct and polite to pussyfoot around the issue.

* Social niceties are a part of society.  It’s important to say “please” and “thank you”. It’s important to take part in polite conversation.  I realize most Aspies find it annoying that alltistic/NT people say “How are you doing?” when they really do not care how we are doing.  They really don’t want us to answer honestly and tell them all about our day. They expect us to say “Fine.”  It’s a pointless conversation really, but it’s part of social etiquette. So is talking about the weather. “Nice day we’re having.” “Looks like it’s going to rain later.”  These are pointless conversations strangers have with other strangers because unlike Aspies, NTs seem to have difficulty standing next to each other and being silent.  Although the conversation is pointless, the intent is to connect (albeit for only a few seconds) with another person. Ignoring the polite rules of society because we feel it is unnecessary is another behavior that makes others think Aspies are rude.

* We have to be accountable for our behaviors too.  We say we want others to think of our feelings. To get them to do this, we have to do the same.  We have to think of others’ feelings too. We know we need our down time to regroup, but we have to make sure that we aren’t ignoring others in the process.  While meltdowns are sometimes inevitable for us, we have to ensure that we aren’t hurting other people with our behavior during a meltdown. (Some Aspies have admitted they say the most awful things to their spouse during a meltdown.) Sometimes we can’t help how we feel: overstimulated, overwhelmed, exhausted.  We may not be able to control the emotions, but we do have some control over what we DO with the emotions. We need to be accountable for these actions. Again – how would we feel if the behavior we just displayed was done to us?

* Having Asperger’s is a reason for our behavior. It’s not an excuse. Our diagnosis allows us to understand our behavior. It gives us a sense of community as we find other people with Asperger’s to relate to.   It is important that we identify our strengths and our limitations, but it’s not an excuse not to try. I see so many young Aspies online who have said things like “I have Asperger’s so I don’t like people.” No.  That’s simply not true.  You don’t get to use Asperger’s as an excuse to be rude. You don’t get to use it as an excuse not to try. There is a difference between knowing where to draw the line and not even making an attempt.  If we want people to understand, we have to try to meet them halfway.  A friend invites us to dinner. Maybe we know that we can’t tolerate a loud, noisy restaurant on a Friday night, but we know we can handle a familiar restaurant at lunch time. Make a lunch date instead. Don’t simply give up on meeting your friend because you “have Asperger’s”.

Sometimes it is hard for us not to be bitter. Living in a world that often does not understand us and does not make exceptions for our differences is exhausting, but we aren’t doing this for the NTs. We’re doing these things for US. Because changing these behaviors makes us  better. These changes makes us kinder and more empathetic. They help us take accountability. They help us say “Asperger’s is part of who I am, but it isn’t ALL that I am.” And you are so much more than just an Aspie. You are.

You are kind.
You are caring.
You would never want to intentionally hurt someone you care about.
You want to be a good friend even if you don’t always know how to do it.
You have a big heart hiding behind your introverted self.
You have an amazing amount of compassion.
You are loyal and hardworking.
You want to be accepted.
You want to find your place.
You want to play the game, but you can’t seem to figure out the rules.

The rules start here.
Treat others the way you want to be treated.
Be honest but be nice about it.
Remember that not all truths (especially opinions) need to be said out loud.
Be polite, even if it seems silly.
Know your limitations.
Take accountability for your actions.
Don’t ever, ever use your diagnosis as an excuse not to try.

And finally – never give up.  You are not alone. 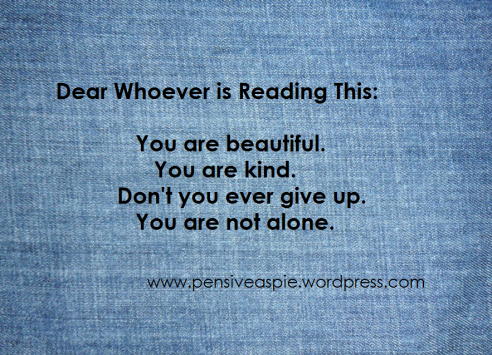 77 thoughts on “Just because you have Asperger’s doesn’t mean you get to be an ass.”