Facebook, Twitter, LinkedIn, online forums and other forms of social media allow people all over the world to connect. In the online Asperger’s support groups I belong to, members with a confirmed Autism/Asperger’s diagnosis and those who self-diagnose/suspect they may have Asperger’s are equally accepted. No “proof” is required for an Aspie group to embrace you. Because there are so few mental health professionals that care for adults on the spectrum, many adults search the internet looking for answers.  Social media has been a lifeline to many people with Asperger’s, but it can also stifle their personal growth.

I’ll start with the positive. Here is how social media helps a person with Asperger’s:

It helps answer their questions about Asperger’s.  Many people with Asperger’s have felt alienated for most of their lives.  After realizing their quirks may be caused by Asperger’s, they go on a hunt for answers.  It’s not uncommon to see these types of questions in an online aspie support group:

People ask all kinds of questions trying to determine which behaviors are governed by their own personality and which behaviors occur because of their Asperger’s. There are books and other types of media to help answer questions, but connecting with other people who have Asperger’s not only answers questions, it helps them feel less alone (especially when another members says “I do that too!”)

Online communities allow Aspies to make friends – real friends – for maybe the first time in their lives without the stress of being socially correct.  Being online removes the stress of eye contact, correct posture, correct tone and appearance.  You can sit in your favorite ratty pajamas and make a friend without ever having to brush your hair or put on shoes.  Because the groups are Aspie support groups, there is already a commonality in the group: Asperger’s. No painful conversations trying to find some mutual connection. No internal dialogue about remembering eye contact or not standing with your arms crossed. There is safety behind the screen.

It allows us to have a dialogue with someone who thinks the same way we do.  When I talk with my friends who have Asperger’s, we have a different type of conversation. I can’t explain it exactly except to say we speak the same language. We’re straight-forward. We don’t get offended. Our conversations are logic-based, yet we laugh. We share. We know we don’t have to pussy-foot around conversation to make our point. There is a connection there that is amazing. It’s so nice to NOT have to explain your point of view because the person just gets it.

Unfortunately, the use of social media can also inhibit the social skills an Aspie needs to function in the real world because:

Support groups are designed to be supportive without being constructive.  Almost all of the support groups on social media are managed by other Aspies and not mental health professionals.  There is often no accountability for behavior.  You are simply allowed to be who you want to be as long as you aren’t intentionally attacking another person.  There is always someone to like your post.  It doesn’t matter what you do. If you’re a grown adult who likes to take pictures of her beanie baby dolls in different poses, someone tells you that you’re awesome! If you’re a grown adult who believes there is an alternate universe made up of fake Figgi humanoid characters and that for every human there is a Figgi, and you spend your entire day talking about the magical Figgis who live in Figgiworld, people tell you that you are awesome!!  They even encourage you! “How are the Figgis doing today?”  You can be as immature as you want to be and you are AWESOME!  It’s like one of those Barney episodes where the kids exude approval by constantly nodding “Yes” and smiling no matter what happens. It’s surreal.

These groups are fantasy worlds. In the real world, if a 35 yr old woman walked up to her coworkers to share pics of her beanie baby dolls in different poses, she would not hear that she is “Awesome!”  She would be told that childish things are for children. If a coworker started talking about humanoid creatures in an alternate reality that “really, really are real! and I love Figgi Bon Jovi!!” they would be ostracized and laughed at.  Because these behaviors are accepted and encouraged in social media groups, Aspies may not learn what is socially appropriate. 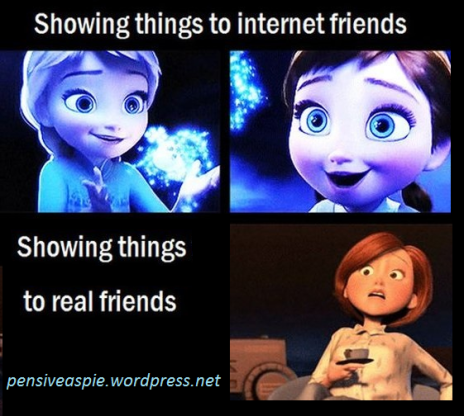 Because they are not discouraged from hyper-focusing on their obsessions, they may not learn how to manage their obsessive thoughts. They may become even more confused when they do try to interact with people in the real world by behaving the same way they do in their online Aspie groups. In the Aspie groups, the behavior is rewarded positively with praise and compliments. In the real world they are chastised and excluded. They may not understand why they are not successful with interactions in real life and may choose to remain in an online support group world instead of interacting with the real world because the online group accepts them without asking them to adapt to the social norms of society.

When Aspies hide in the sanctuary of an online community that never asks them to push their boundaries, they may stop growing.  We learn by challenging ourselves. If an Aspie finds a safe sanctuary that allows them to play with toys, be as immature as they want to be, and never leave the safety of their bedroom and their pajamas, they may stop trying to interact with the world. This can be crippling.

Making online friends is wonderful. I have met some of my dearest friends through online groups, but in order for a person with Asperger’s to be successful in the real world, they have to learn how to socialize in person.  They have to learn that while it is normal for an Aspie to have some sort of obsession (dolls, trains, sci-fi), it is not considered “normal’ in the real world. Coworkers and friends will not want to hear yet another rousing tale of the difference between two types of trains even if you find it exhilarating.  Eye contact, although uncomfortable, is required.  When you constantly avoid eye contact, people believe you aren’t trustworthy.  There are other social cues – body language, tone, etc than can only be learned by interacting in the real world. It can’t be done by hiding behind a monitor.

With all things, moderation is key.  I believe it IS important to have a place to go where you have friends and are accepted, but I also think that we shouldn’t use that place to hide from the world.  To me, a true friend is a person who is completely honest. A true friend tells me I have lettuce in my teeth. A true friend lovingly tells me when I’m being too loud. A true friend reminds me that although my latest Leonard Nimoy/Star Trek bag is indeed “Fascinating”, I may not want to spend the next hour discussing Spock because our other friend wants to talk about her new baby.  A true friend helps me be a better me because she is truthful with me in a constructive way, and I would rather have that type of honesty than someone who just applauds my every action and tells me I’m “awesome!”.

10 thoughts on “Asperger’s, Autism, and Social Media: Sanctuary or Setback?”